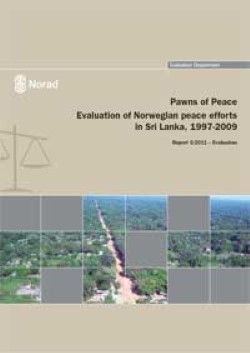 This evaluation assesses Norway’s peace efforts in Sri Lanka from 1997 to 2009. It tells the story of Norway’s engagement, assesses the effects and identifies broader implications and lessons. The analysis is based on interviews with key informants, an in-depth perusal of ministry archives in Oslo, several subsidiary studies, and a review of relevant research, secondary literature and the Sri Lankan press.

Since the end of the Cold War, Norway has shown remarkable foreign policy activism in the pursuit of peace and Sri Lanka is a prominent example of this. Norwegian efforts to bring about a negotiated settlement between successive Sri Lankan governments and the Liberation Tigers of Tamil Eelam (LTTE) spanned a twelve-year period. Apart from its role as peace facilitator, Norway was involved as a ceasefire monitor and an aid donor during this period.

The Sri Lankan peace process is largely a story of failure in terms of bringing an end to the civil war. Norway, however, cannot be held solely or primarily responsible for this ultimate failure and its involvement contributed to several intermediate achievements, including the Ceasefire Agreement, the Oslo meeting in which both sides expressed a commitment to explore a federal solution, and the signing of a joint mechanism for post-tsunami aid. The ceasefire in particular had positive impacts on the ground situation, but in the end these accomplishments proved to be ephemeral.

The peace process reproduced, rather than transformed underlying structural obstacles to conflict resolution. It failed to induce fundamental changes in the disposition of the state and anti-state formations in Sri Lanka, and to some extent it caused a further entrenchment of positions. The hurting stalemate which led to the Ceasefire Agreement (CFA), initial peace talks and a period of ‘no war-no peace’, was followed by an escalating shadow war and finally open hostilities ending in the defeat of the LTTE in May 2009.