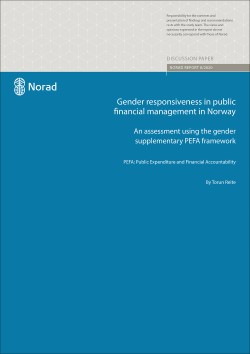 Using the PEFA gender framework, Norway scores reasonably well on including gender information in the government’s budget proposal and in annual reports (two out of nine indicators). However, Norway receives low gender scores in other aspects of the state budgeting and management of public finance. Gender is not mainstreamed in the preparation of the state budget and there is no gender tracking of expenditure, limited sex-disaggregated information on performance for service delivery programmes in the budget documents, few impact evaluations that include gender aspects of service delivery and no parliamentary scrutiny of gender impacts of the state budget.

The report discusses why Norway is among the highest ranked in different gender equality indexes, but scores low in several aspects of the PFM area using the PEFA gender assessment framework. The government refers to the general role of the Norwegian budget system to ensure a comprehensive balance of a range of various policy objectives. The budget has relatively few explicit objectives on crosscutting issues and few direct measures. The budget and the public financial management system alone are not illustrative regarding how the government achieves results on gender equality. The government usually chooses to supplement with other measures together with the budget. These include instructions regarding mainstreaming, provisions of law, regulations and administrative directives.

Furthermore, the Norwegian government is based on ministries with high autonomy and a high degree of delegated authority to budget entities and lower tiers of government. Many of the central instruments in Norway are built into the Norwegian welfare system at the sectorial or municipality level. The planning and reporting of equality results, including on gender, are decentralised based on a high degree of managerial flexibility and trust. The Norwegian public sector governance relies on defined outcomes on how public funds are used, monitored through a highly developed national statistical system, periodic evaluations and result reporting on outcomes or impacts. In general, access to sex-disaggregated statistical data in policy areas is well-developed in Norway compared with other countries.

The author of the report presents some options for strengthening gender mainstreaming in the budget process in Norway. The government’s preliminary comments are that changes in the budget system and financial management to support gender equality should be explored and elaborated further, taking into account Norway’s more overarching principles and tradition of public administration and implementation of government policies. One of the recommendations on strengthening the practices for assessing the distributional effects of large investments will be followed up by the government—specifically, through considering this in the preparation of a new guidance document for Concept Alternative Investigation of large public investments. The government is also working on a guidance document on gender equality considerations under the Instructions for Official Studies (central to the preparation of new initiatives included in the budget elaboration process).

The report finds the PEFA gender framework biased in its presumption that most central government governance is oriented toward more detailed centralised decision-making, coordination and control mechanisms. When it is applied to a government system like Norway’s, the author finds a need for the framework to open for a broader, more flexible and context-sensitive analyses of gender equality.