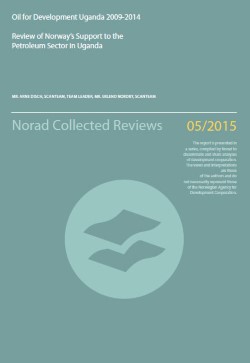 Norway’s Embassy in Kampala commissioned a review of Norway’s Oil for Development program in Uganda covering the period 2009-2014.

The program has been built up around three so-called pillars, on resources, environment and revenue, with a central secretariat servicing program management and the three technical pillars. Norway provided a total of NOK 147 million for this first period.

While the program was to have ended in June 2014, it was extended till the end of the year due to the withholding of Norwegian funding from the public sector for about half a year due to a serious case of corruption uncovered end of 2012 with other Norwegian funds.

Norway has agreed to fund a further three-year period, indicatively with NOK 53 million.