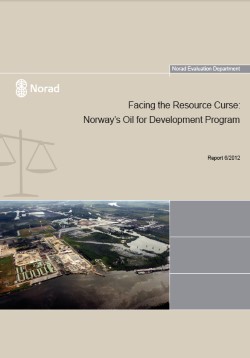 Oil for Development: A Significant and Successful Program with Strategic Potential

Oil for Development (OfD), begun in 2005, is a comprehensive program addressing resource, financial and environmental dimensions with a focus on capacity development in the public sector but including larger sector governance concerns. It is a flagship program in Norway’s development cooperation as it addresses a strategic sector at high policy, institutional and organisational levels; has built a network of international partners; allowed Norway to play a more visible role in a number of countries around the world, in large part because Norway is in fact the most important player in this field, which also means that OfD is one program where Norwegian support produces documentable and attributable results.

Results have been most important in the resource sector by strengthening institutional frameworks and key public sector actors. In the finance sector, when Norway has committed sufficient resources, important achievements have been produced, but the reach has so far been limited. Environment often suffers from lack of local capacity and will, and by not investing enough in building larger local partnerships with non-state actors. Organisational development may be fragile as capacity building has been too limited to specific actors rather than addressing larger labour-market imbalances, and the governance concerns have been too public sector focused.

The petroleum sector is increasing in importance world-wide: the number of producer countries is growing, including in poor states with weak governance systems, and prices remain high. The threat of the “oil curse” where private companies and corrupt elites capture most of the benefits for themselves is posing global governance challenges, including to democracy and gender gains. The importance of OfD is thus greater than ever, and should be supported and developed in light of this.

OfD should have the “oil curse” as its main concern, and build strategic alliances and its own program around this. Sector governance issues should have a societal and not just public sector focus. Country programs should maintain the three “pillars” of resource, revenue and environment but be more inclusive of aspects such as safety, and governance performance should be important when deciding on the entry/exit of countries to the program. Capacity development should have a broader scope, based on clear needs-assessments, probably longer time-horizons, exploit regional collaboration, peer learning, closer alliances with non-Norwegian knowledge centres to overcome capacity constraints in the Norwegian public agencies that today are the key skills providers.