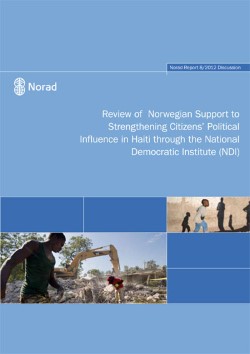 This report on “Norwegian Support to Strengthening Citizens’ Political Influence in Haiti through the National Democratic Institute (NDI)” is delivered to Norad under the contract of the International Law and Policy Institute to review a civil society democracy building program in Haiti implemented by the National Democratic Institute (NDI). The program has been funded by Norway since August of 2010.

The report is carried out by a team put together by International Law and Policy Institute (ILPI) in Oslo. The team was lead by Gerald Murray, professor in social anthropology, with several years’ experience in Haiti.

An abbreviated summary of the report:

The core element in NDI’s civil society programming in Haiti is the Initiative Committee (IC), a democratically elected 11 member group. The principal objective of the program has been to encourage citizen participation and advocacy around reconstruction and development issues via these ICs. NDI’s contribution to ICs is twofold: (1) organize them through intensive training in a village or urban neighbourhood and (2) support them logistically through event financing at the communal and departmental levels.

NDI has formed other organizational units called “platforms” at the municipal and department levels. These are coalitions, broader than ICs, of prominent individuals who meet regularly to plan interactions with representatives of the local and central governments to spur the government into productive action on locally important issues.

The program has successfully met the quantitative goals of forming more ICs and of activating platforms and coalitions. The review team was impressed with the enthusiasm that IC members feel at being organized to dialogue with elected leaders as a group, instead of being forced to go to them with issues as lone individuals.

The program has several problems as well that are managerial, budgetary, and conceptual. Monitoring / evaluation procedures are weak. The ICs have existed for 12+ years. There is no discussing their failure to achieve their central goal: motivating the government to release funds for locally identified priorities. The program avoids this dilemma by using program activities themselves (committee formation, public forums) as measures of program “results”. The review team considers these to be a spurious measure of genuine program effectiveness.


In terms of gender issues, the program faces the dilemma that in many of the 11 member ICs, only a small minority are female. The reasons for this are discussed in the report. NDI has encouraged female participation. The current gender ratio appears to be one third female.  However the report points out that the most pressing gender issues are not IC gender quotas but other problems that surfaced in the field visits.

Despite problems, the report concludes that NDI has effectively fulfilled its part of the agreement at least in terms of activities if not of results.  We recommend that MFA and NDI deal with the conceptual, budgetary and managerial issues raised in the report and continue in partnership.