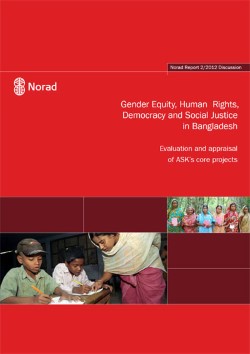 The document review and interviews with various stakeholders indicate that overall the ASK project “Promoting Gender Equity, Human Rights, Democracy and Social Justice” (2007- 2011) has progressed as planned and achieved the expected results. ASK has carried out most of the planned activities and accomplished what they set out to achieve. The implementation of activities is documented through extensive and detailed quantitative reporting at the output level. Valid explanations are generally given when asked about deviations from the original plans or failure to meet certain targets.


Measuring of the actual outcomes of the project was not systematically built into the design of the project, and only the 2010 annual report is making efforts to report on results at the outcome level. A baseline study conducted in 2008, covering three of the Districts where ASK works, has not been used to measure results of the interventions. The log frame is centred around outputs and activities with targets primarily indicating the number of activities to be carried out. The lack of built-in results based management hampers the possibility to systematically capture results at the outcome level, and provides a potential for underreporting of actual achievements.


ASK has made efforts to strengthen the institutional management and several positive developments have been implemented during the lifespan of the project. Still, however, there are challenges, which need to be met in order to improve planning, monitoring and reporting.