The purpose of the HRITF is to help develop the evidence base on Results Based Financing (RBF) approaches in the health sector and their ability to increase the quantity and quality of Reproductive, Maternal, Neonatal and Child Health services used or provided.
Skriv ut
Del
Del
Tweet
Tweet
E-post 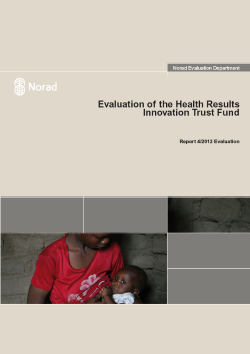 The Health Results Innovations Trust Fund (HRITF) is a multi-donor trust fund supported by the governments of Norway and the United Kingdom and managed by the World Bank. The total commitments to the HRITF are US$ 575 million equivalent (this fluctuates according to exchange rates), making it the largest trust fund operated within the Health, Nutrition and Population portfolio and one of the largest operated by the World Bank.

This evaluation is the first in a series of evaluations which will take place over the course of the programme.

In the four years since its launch the Fund has contributed to increasing the awareness about RBF both within the World Bank and in the health sectors of more than 45 countries where it has supported a range of initiatives. The main activities included knowledge grants and products, seminars, publications, design of pilots and rigorous evaluations. The programme has generated demand and interest among country governments, donors, NGOs, academia and civil society. The knowledge base on RBF is also increasing and will increase further when the nearly 20 RBF pilots and respective impact evaluations supported by the Fund begin to deliver results over the next few years. Although the evidence base for RBF remains narrow, there is already a huge potential and opportunity to draw and learn key lessons just by using the information being generated.

Case studies in Rwanda and the Kyrgyz Republic, and reviews of country evidence undertaken for the evaluation in Benin, Burundi, Democratic Republic of Congo, India, Nigeria, Tajikistan and Zambia suggest that while the RBF pilots are likely to generate useful knowledge, results will depend on specific country and health sector context. RBF is not a standardised intervention. Most existing pilots have a clear focus on reproductive, maternal, neonatal and child health services, on poverty, equity and gender issues (which might improve with more systematic social assessment tools under development) and a potential to improve outputs and outcomes. The impact evaluations to assess each pilot are generally well designed and have achieved a reasonable balance between scientific rigour, country relevance, feasibility of measuring impact in fast changing health sectors, and ownership. However, a key lesson still to be learned is at what cost and level of effort can improvements be achieved or sustained.

The evaluators are confident that when the results of the RBF pilots and impact evaluations become available, the evidence on the feasibility of RBF will begin to grow in a way that would not have been possible without the HRITF. Hence it is imperative for the Fund to concentrate its efforts on learning from the pilots it is currently supporting. This work should set the pace and focus for future efforts, and help consolidate strategic direction.