Evaluation of Norwegian Development Cooperation with the Western Balkans 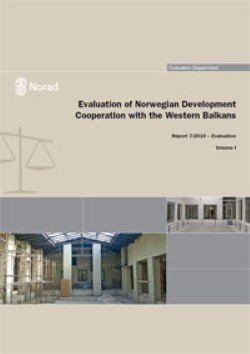 
This report presents the findings of an evaluation of a large portion of Norwegian development cooperation that has not previously been systematically evaluated. During the period 1991-2008 the Norwegian aid to the Western Balkans amounted to about ten billion Norwegian kroner. The decision by our Department to carry out this evaluation was based partly on the Norwegian Government’s criterion for evaluation of importance and size, partly on the criterion of uniqueness, in the sense that the object of the evaluation has been development aid to European countries.

Overall, the conclusions are quite encouraging. The aid has met the needs on the ground and the programmes have generally been effective. While it may be difficult to judge the longer term effect of many of the undertakings, others are assessed to have had quite positive impacts.


This does not mean that there have been no weaknesses. The report raises a number of issues, some explicitly, others more implicitly in its many observations and findings. Some of these issues are well-known from other evaluations, others more thought-provoking.