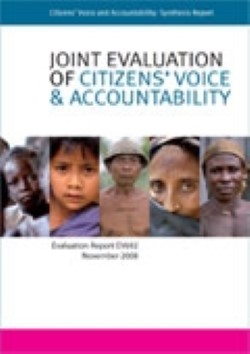 Citizens' Voice and Accountability: Understanding what works and doesn't work in donor approaches


Lessons and recommendations emerging from a joint donor evaluation
I Introduction: Why Citizens' Voice and Accountability Matters
The quality of governance is recognised as one of the central factors affecting development prospects in poor countries. Citizens' voice and government accountability ('CV&A') are important dimensions of governance. Citizens' capacity to express and exercise their views effectively is believed to have the potential to influence government priorities and processes, including a stronger demand for responsiveness, transparency and accountability. Governments that can be held accountable for their actions, for their part, are assumed to be more likely to respond to the needs and demands articulated by their population.

To date, there have been only limited attempts to evaluate donor interventions to support CV&A. A joint evaluation commissioned by a group of donors represents an effort to bridge that gap (see Box 1).  The evaluation was intended to deepen understanding of what works and what does not work in donor support to CV&A, and to uncover the reasons why, drawing on experiences from seven country case studies and  fifty-seven interventions.


II Effects of CV&A interventions have remained limited and isolated
This evaluation sought to assess changes CV&A interventions have helped to bring about along four dimensions: changes in practice, behaviour, policy, and power relations. The evidence suggests that some CV&A interventions have generated positive outcomes, mostly related to changes in behaviour and practice, such as raising citizen awareness and of encouraging state officials to be more responsive, especially at the sub-national level (see Box 3). In particular, when interventions have been targeted explicitly towards marginalised and socially excluded groups, such as women and ethnic minorities (e.g. Mozambique, Nepal), they have been useful in empowering such groups. The same can be said of the work that donors have undertaken with non-traditional civil society groups like social movements and trade unions (e.g. Bangladesh), as well as religious organisations (e.g. Indonesia). However, this kind of focus has been the exception rather than the rule in the interventions included in the evaluation.
III Understanding the limited effects of CV&A interventions: donor assumptions & power relations/informal institutions
An important part of the reason for the limited results that CV&A interventions have been able to achieve lies in donor expectations that are based on a set of assumptions that are not always realistic, including the following:

Additionally, voice is often treated as an unproblematic concept, without addressing the fundamental question of 'whose voice' is being heard. In reality, the voices of the poor are far from homogeneous - and these voices may not necessarily be complementary but actually compete with one another. In other words, not all voices are equal or equally heard.

In addition, there is an issue regarding the sustainability of CV&A interventions over time. Many of the organisations supported by donors, especially those aimed towards voice (including NGOs in particular) are highly aid dependent, and it is not clear how such groups are intended to become self-sufficient.

There is a growing pressure for donors to disburse greater funds with less staff. This means that large amounts of funding are going into interventions in ways that may often be beyond the absorptive capacity of the implementing organisations.

Finally, in terms of aid effectiveness, the evidence shows that donor coordination efforts in CV&A interventions are limited.