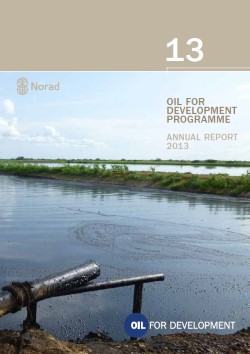 Eight years into its existence as a programme, OfD continues to experience a high demand for assistance.

In 2013, the OfD country portfolio counted 18 countries in Africa, Asia, Latin America and the Middle East, 15 of which were active cooperation programmes.

These countries all face different challenges and opportunities, but share an aspiration to make the most of their natural resources and have turned to Norway for assistance. For many of them, the petroleum sector is increasing in significance. In East Africa, for instance, Mozambique, Tanzania and Uganda have made game-changing discoveries of oil and gas in the last few years. In other OfD partner countries, including South Sudan, Timor-Leste and Iraq, rents from petroleum production already constitute a major part of national revenue. The way in which these countries harness the petroleum resources will be a decisive factor in their future development.

There were also several challenges. The OfD programme is engaged in a technically complex and politically contested sector, often in fragile and conflict-ridden states. Developing capacity under such circumstances is difficult and not without risk. For example, the outbreak of largescale violence and internal conflict in December 2013, put the entire South Sudanese statebuilding project to a test and jeopardized the progress and achievements of OfD’s efforts to date.

In Uganda, the OfD programme was put on hold for most of the year due to corruption in a non-related multilateral aid programme at the Prime Minister’s Office. Also in Mozambique, most of the programme activities were on hold due to investigations of financial discrepancy by the Central Control Unit in the Norwegian Ministry of Foreign Affairs.

In order to enhance contextual awareness and contribute to strategic planning, the OfD programme prioritized political economy analyses and risk assessments for several country programmes in 2013. In addition, considerable efforts were made to clarify and document mandates, responsibilities and guidelines in the management of the programme.