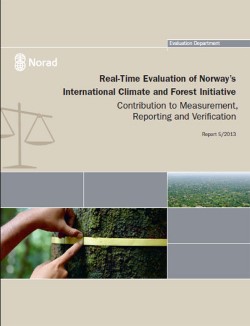 The Government of Norway’s International Climate and Forest Initiative (NICFI), launched in December 2007, has pledged substantial development assistance to reduce emissions from deforestation and forest degradation in developing countries (REDD+). One aspect of NICFI’s work is support for the measurement, reporting, and verification (MRV) of greenhouse gas emissions from forests in relation to REDD+. This information is essential if developing countries are to receive payments based on results achieved in reducing emissions.

The purpose of this evaluation is to assess NICFI’s support to monitoring, reporting and verification and the extent to which this support has contributed to NICFI’s general objectives. The evaluation covers the period from 2007 onwards and focuses on institutional, political and economic perspectives. Four focal countries were selected for in-depth studies (Democratic Republic of Congo, Guyana, Indonesia and Tanzania), as well as multilateral initiatives.

The evaluation shows that NICFI’s work on MRV has provided important practical lessons to the debate at the international level under the climate change negotiations. At country level, the evaluation finds varying progress on establishing MRV systems, with Guyana as the most successful example. The political context and national capacity at the outset play an important role. The evaluation also points out a number of enabling factors that can be used to detect potential barriers to establishment of MRV systems, as well as for interventions to address these.

There are still few countries that are close to having a fully functioning MRV system. The costs of establishing MRV systems have not been sufficiently considered. This is important for comparing running costs with the potential for results-based payments. The evaluation points out that sustained progress on MRV is likely to be difficult in the absence of result-based payments and an international agreement on REDD+. Therefore the "added-value" of the MRV systems should be emphasised, for instance by tying the systems to domestics needs for the forest sector and land use information. This evaluation is a part of a series of evaluations conducted "real-time" as the Norwegian initiative is on-going. Through a framework agreement with a consortium of independent consultants and experts led by LTS International, evaluations progressively assess the results of NICFI with regard to its objectives and they are intended to provide timely information and recommendations to stakeholders and the public.