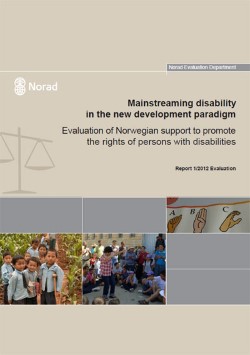 
During the last decade the approach to disability has changed from a medical approach to a social and a human rights-based approach where focus is on removing barriers in society.

Norway has been among the driving forces establishing a framework for including and mainstreaming disability in development cooperation. How has Norwegian support to the promotion of the rights of persons with disability in the last decade been reflecting this?

The purpose of the evaluation was twofold: to document and assess the results of the Norwegian support in the last decade, and to assess the adequacy of the current 2002 Guidelines for the future, with special reference to the Convention on the Rights of Persons with Disabilities.


The documentation and analysis of Norwegian support in the four case countries Malawi, Nepal, the Palestinian territory and Uganda, and the desk study of the support to Afghanistan, argue for a two-track approach, utilizing gender mainstreaming as a model. Targeted initiatives give short term results and empower the rights-holders. Mainstreamed initiatives may take more effort and time, but - when successful – capacitate the governments (duty-bearers) in providing long term and sustainable results by removing barriers for inclusion and universal access.


The research team systematically analyzed the Norwegian funded projects in light of a human rights-based theory of change, relying on the assumptions that projects need to empower persons with disabilities and their organizations, as well as build the capacity and demand accountability of the duty-bearers to take their responsibility for fulfilling the rights of persons with disabilities as stipulated in international conventions and national laws. Ensuring that research, statistics and knowledge are fed into the programming is also a key dimension of this theory of change. The evaluation found that very few stakeholders applied a human rights-based theory of change, but rather focused on service provision which the team suggests is more likely to address immediate needs rather than creating sustainable changes.


Nordic Consulting Group, in cooperation with researchers from the countries involved, carried out the evaluation and is responsible for the contents of the report, including its findings, conclusions and recommendations.