Mapping and assessment of national, bilateral and multilateral actors’ support to work against sexual based violence in the Great Lakes region in Africa 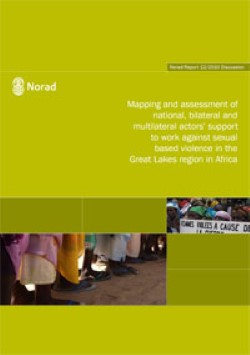 NB! The publication is ONLY available online and can not be ordered on paper.
Your shopping basket
Mapping and assessment of national, bilateral and multilateral actors’ support to work against sexual based violence in the Great Lakes region in Africa.pdf
Download


The Democratic Republic of Congo (DRC) has, since 1996, been in a state of open or lowlevel, localized conflict, notwithstanding multiple peace accords and ceasefire agreements, and the presence (since 1999) of the UN Mission in the DRC (MONUC), one of the largest peacekeeping operations in the world.1 Eastern Congo has been the site of the most persistent fighting, wherein an array of actors – including various rebel factions supported by Rwanda and Uganda, the semi‐reconstituted national army (Forces Armées de la République Démocratique du Congo, FARDC), and MONUC forces – have battled each other and preyed upon the civilian population.2 Sexual violence, looting, gender‐based violence (including the targeted killing of men and boys), and various forms of torture have seemingly become routine among some of the combatants.3 Unfortunately, the particular condition of irregular, decentralized, often village‐based violence committed by a combination of state and non‐state actors makes the conflict exceedingly deadly and difficult to stop. This also means that it is difficult to reach consensus about the number of survivors of sexual violence and, relatedly, how to access and treat them most effectively (Pedersen 2009; see also Baaz and Stern 2009).4 While the Panzi hospital in Bukavu, and a few other hospitals and health centers throughout the region, are providing an indispensable service to survivors of sexual violence, resource limitations on the part of both the hospital and survivors mean that many never receive any assistance.5