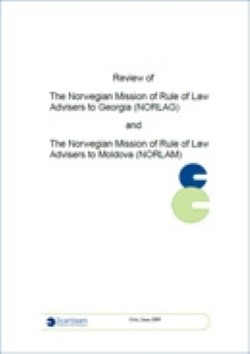 NB! The publication is ONLY available online and can not be ordered on paper.
Your shopping basket
Review of NORLAG and NORLAM.pdf
Download

In late 2002 and early 2003 the Norwegian Ministry of Foreign Affairs (MFA) took an initiative vis-à-vis the Ministry of Justice (MOJ/N) to create a roster of justice-system personnel for deployment abroad to complement CivPol, so as to cover the whole "chain of justice" (rettskjeden). They clearly had in mind only the part of the justice system that deals with crime and punishment, ie, what this report shall refer to as the "criminal-justice chain".

In 2008 the MFA and MOJ/N agreed that the MFA would commission an independent review of NORLAG and NORLAM. The MFA gave the task to Norad, which in turn awarded the assignment to Scanteam. The main points from the Terms of Reference are as follows:

The stated dual purpose of the review is "to have an assessment of NORLAG and NORLAM, and to provide guidance as to whether this assistance should continue and, if so, how it should be organised in the future".

The review has three, given objectives: