End-review of Capacity Building and Emergency Repair of Hydropower Plants 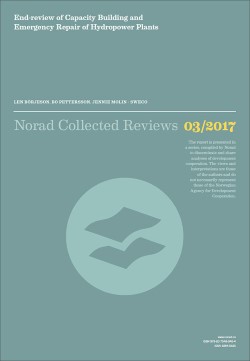 This report presents the findings and recommendations for the End-review of Capacity Building and Emergency Repair of Hydropower Plants (ERP) in Tanzania.

The ERP project is currently in its final stages and has been carried out with the support of the Royal Norwegian Embassy (RNE) through an institutional co-operation between TANESCO and the Norwegian Water Resources and Energy Directorate (NVE). TANESCO has been the implementing agency for the project and NVE has had the role of program administrator.

Their availability is expected to be substantially improved and there will be less forced outages. The operational limitations of units 1 and 2 in the Kidatu Hydro Power Plant have for example been fully remedied and the units are now available for operation at full capacity. The specifically procured owner’s
engineer, Landsverkjun of Iceland, has closely monitored the rehabilitation efforts. This setup has contributed to a successful project.

Seven out of nine Capacity building courses have been conducted so far and they have been very beneficial for the organisation. A frequently mentioned example in this regard has been improved procurement and negotiation skills, which have facilitated the procurement of ERP Contractors.

Another step forward was taken when the Computerized Maintenance Management System at the Kidatu and Kihansi hydro power plants was taken into operation. The capacity building program has been carried out by a small number of providers including the International Centre for Hydropower in Trondheim, Norway and TANESCO in cooperation with Kafue Gorge Regional Training Center in
Zambia. The individual courses have responded to the original course requirements.

There are currently some quite important maintenance efforts that are being pushed forward since they would require a complete shutdown. In the worst of cases, this reluctance could lead to severe incidents that could result in a several month downtime. For these reasons, this topic has to be reinforced at all management levels of TANESCO.

A major concern through the duration of the project has been TANESCO’s inability to perform timely payments. This inability has caused significant delays and added a quite significant burden to the project. Besides this key factor, cooperation between the involved stakeholders has worked quite seamlessly.

The report has identified several recommendations for the future. Through the course of the Endreview engagement, the need to develop a hydropower training facility has been discussed at several occasions. The report presents several options in this regard.

A second recommendation is to proceed with additional maintenance training and implementation of maintenance systems at all hydropower plants. A final recommendation is to develop and monitor program indicators for capacity building that also consider qualitative aspects. In summary, the program has been carried out in accordance with the original intentions, although with significant delay.