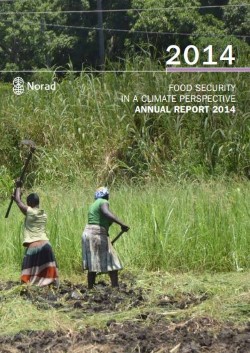 More than 805 million still suffered from undernutrition and hunger in 2014.

The vast majority of these people live in developing regions. In Sub-Saharan Africa, one in every fourth person remained undernourished in 2014.

The world’s population is estimated to exceed nine billion in 2050, requiring a 60 per cent increase in food production.

This will put severe pressure on food production systems world-wide, which already are suffering from an exhausted resource base.

Smallholder farmers, of which most are women, make up the vast majority of people employed in global agricultural production. This group accounts for half of the world´s food insecure people.

Further, smallholder farmers in developing countries have limited access to food markets, resulting in loss of income opportunities and loss of food. The Norwegian Strategy for Food Security in a Climate Perspective (2013-2015) is a policy tool for Norwegian development cooperation.

The annual report (2014) will pay considerable attention to three topics: