The Legitimacy of the State in Fragile Situations 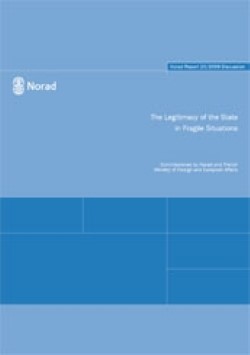 Bestill gratis papirutgave:
Til handlekurven
The Legitimacy of the State in Fragile Situations.pdf
Last ned

State building has again become a central theme in the international development discourse. State legitimacy is considered the key to understanding state building. This is illustrated in a study undertaken for OECD/DAC by Norad and the Ministry of Foreign and European Affairs in France. The Norwegian researchers Stein Sundstøl Eriksen and Ole Jacob Sending of the Norwegian Institute of International Affairs (NUPI) and two French researchers, Séverine Bellina and Dominique Darbon carried out the study together. The report was presented and debated in an international seminar in OECD/DAC in February and a seminar in Norad in September 2009. In both places, the participants praised the study. They referred to an increased understanding of the relations between the state and the population.

The report has an academic foundation but a practical approach. It deals with state-building in so-called fragile states but is valid also for other countries going through periods of fragility. It illustrates how state legitimacy develops as mutual relations between the state and the society.

How should the leaders of the state act to achieve the support of the population? What do people expect from the state? That the state gives them security and social services, shows respect for social norms and values, respect for traditional institutions, respect for human rights? If groups of people experience that the state does not deliver, where to they turn? In this context, what can and should the donors do, or not do?

The report also illustrates the importance of considering support of governance and democracy in a larger context. It indicates that the key to a sustainable and fair development lies in the considerations of all aspects of the relations between the state and the citizens.